The renowned hardware maker Razer announced via Twitter that it has added an all-pink color option to its portfolio. Although they look playful, the peripherals from the Quartz Edition are among company’s bestsellers and they are meant for serious gamers. 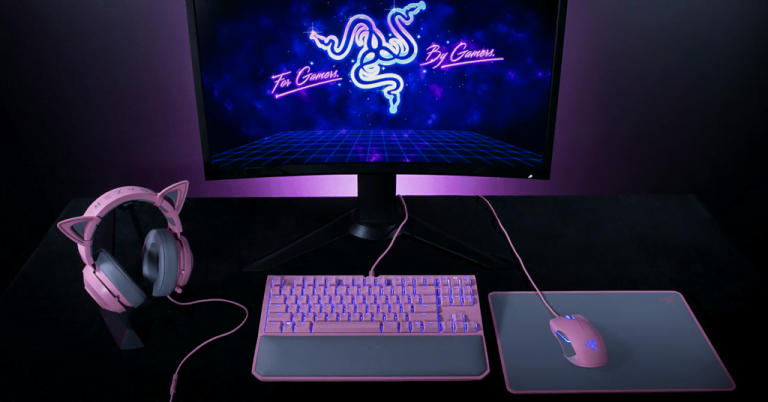 The renowned hardware maker Razer announced via Twitter that it has added an all-pink color option to its portfolio. Although they look playful, the peripherals from the Quartz Edition are among company’s bestsellers and they are meant for serious gamers. The all-pink edition is comprised of the Lancehead Tournament Edition mouse, BlackWidow Tournament Edition keyboard, Invicta mousepad, as well as the Kraken Pro V2 headset. The latter has a cute kitty ears add-on, but it needs to be purchased separately from the headset.

The BlackWidow TE keyboard from the Quartz Edition is the tenkeyless version of the model. It comes with a 50g actuation force of the switches. Their lifespan is estimated at 80 million keystrokes. The keyboard also has a 10-key rollover, 1000Hz polling rate and allows on-the-fly macro recording.

The Invicta mousepad has a dual surface for speed and control, respectively. Depending on your individual playstyle and the preferred gaming genre, you can use the Speed surface or flip the mousepad over and use the better textured Control surface.

As for the Kraken V2, it is one of the most successful headsets in Razer’s line-up. It has 50mm drivers and features a comfortable headband with thick padding that makes it suitable for long gaming sessions. The aluminum frame adds to its durability.

Razer has also released kitty ears in several colors. The add-on is optional and sold separately from the Razer Kraken V2 headset.

At the time of writing, the Quartz Edition peripherals can be purchased through the official Razer store. There is no telling if they will be available at third-party retailers.

Assassin’s Creed 4: Black Flag and World in Conflict Free on PC in December

Steam Users No Longer Able to Buy Games via Bitcoin