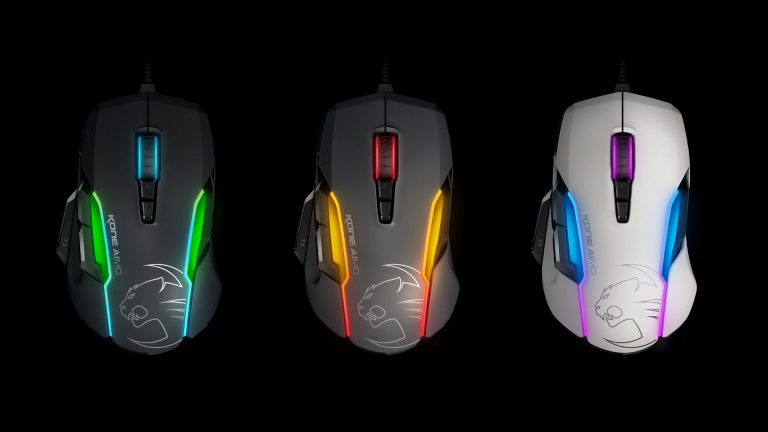 Kone AIMO has been crafted after extensive consultations with more than 30,000 gamers. ROCCAT asked as many as 30,000 fans of the brand about the size, shape and weight, and sensor of the perfect gaming mouse.

The new mouse is called AIMO as it possesses the so-called AI (Artificial Intelligence) feature. According to the provided information, the Kone AIMO does not need programming. Instead, all AIMO products coordinate lighting to match user’s screen.

The Kone AIMO possesses an Owl-Eye optical sensor that precisely detects the mouse movement. The sensor offers DPI in the range between 100 and 12,000, although ROCCAT recommends 400-3000 DPI for optimal performance. The multi-color illumination can be adjusted to respond to the RGB color settings of the entire PC setup.

The mouse comes with a total of 12 buttons as well as a 4D Titan Wheel with advanced tilting. The Easy-Shift technology enables users to assign various functions to the buttons in a breeze.

The AIMO also possesses a Tri-button Thumb zone, 32-Bit ARM MCU and Onboard memory for macro storage and execution.

ROCCAT Kone AIMO gaming mouse will be launched in September at a suggested price of $90 (£69).