The first thing that crossed my mind before putting the Hyperion Fury to the test was that it looks a bit unusual and Logitech has opted for a weird design just for the sake of making the Hyperion Fury stand out from the rest. How wrong I was! The G402 is one of the most comfortable peripherals I have ever used. I did not feel any fatigue even after playing for hours on end. 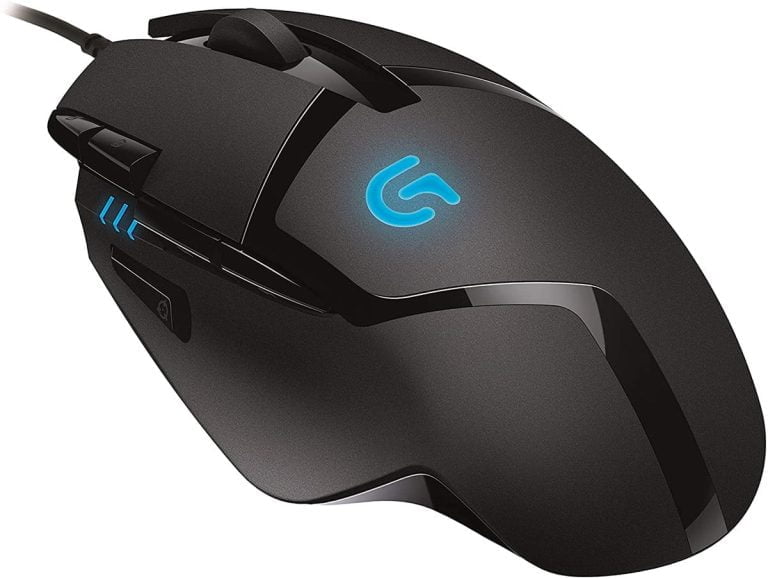 The first thing that crossed my mind before putting the Hyperion Fury to the test was that it looks a bit unusual and Logitech has opted for a weird design just for the sake of making the Hyperion Fury stand out from the rest. How wrong I was! The G402 is one of the most comfortable peripherals I have ever used. I did not feel any fatigue even after playing for hours on end.

As a device designed especially with FPS gamers in mind, the G402 Hyperion Fury has a total of 8 buttons – the compulsory sniper button, buttons for DPI increase/ decrease, two programmable thumb buttons, as well as the standard right and left buttons, and a clickable scroll wheel. All buttons can be programmed via the Logitech software and you can assign them complex macros.

The mouse is equipped with four low-friction plastic feet that ensure its smooth gliding across a wide range of surfaces. The G402 has an optical sensor and offers a max DPI of 4000. Well, that’s much lower than what most of its rivals offer, but I believe it would meet the needs of most FPS players. Under the hood, the mouse sports a 32-bit ARM processor that offers fantastic tracking speeds you can fine-tune via the software.

The G402 Hyperion Fury is, without a doubt, one of the most sophisticated pieces of gaming gear for first person shooters. However, even the most dedicated gamers sometimes use their PC for casual purposes. That’s why I tested the Hyperion Fury in both scenarios and I am glad to tell you guys that it performed admirably in both gaming and day to day activities.

I am positive you will not encounter any difficulties when it comes to performing high-precision tasks be it a headshot or a picture cropping. The mouse is suitable for average-size hands, the buttons are easy to reach, the DPI switching is fast and easy. The latter is a convenience you will appreciate when it comes to getting in and out of sniping mode.

Palm and claw grippers will find the Hyperion Fury particularly comfortable, although I believe it is one of the best fps gaming mice for fingertip grippers, too.

I tested the mouse in Titanfall, StarCraft II: Heart of the Swarm, Star Wars: The Old Republic. Yes, I know that the second is a RTS and the third is a MMO, but I was curious to find out how the G402 performs in other genres. Well, I dare to say that it passed the Titanfall test with flying colors. As for the other genres, it would be great if it had a few more buttons.

If you are a PlayerUnknown’s Battlegrounds or Fortnite: Battle Royale fan, you may also want to see our best mouse for pubg nomination list, before you decide which gaming rodent to pick.

In Titanfall, the rapid DPI adjustment of the Fury, as well as the sniper button and the overall design helped me eke out a few more kills. The mouse does not have an appreciable liftoff range, but there is a lot to be desired as far as the Z-axis tracking is concerned. Still, this would not be a bother unless you are competing at a tournament level.

Overall, the Logitech software is user-friendly and easy to navigate but I consider it relevant to tell you that it lacks an in-program update option. In other words, if you need drivers for your G402 Hyperion Fury or you need to reinstall something, you will have to visit the Logitech website and get it from there.

Having said that, the Logitech Gaming Software remains one of the best currently in existence. It scans your system and creates a profile for the games you own. Then, you can assign in-game functions to each button the mouse possesses.

As for the other features, they are nothing out of the ordinary. I mean, you will have all features a gamer would need, at your fingertips but nothing too crazy. You can adjust the logo brightness and lighting patterns, tinker the DPI settings, program buttons, etc.

In general, setting up your Hyperion Fury is a no-brainer.  If I have to point one serious fault with the software, it would be the lack of built-in game library meaning you have to commit some time to manually program your most-used commands.

The max DPI of 4000 is kind of low as compared to other Logitech-branded peripherals but frankly, I do not know many gamers who have ever gone beyond the 4000 DPI.

The Hyperion Fury is an optical mouse and while some gamers swear by the efficiency of the laser rodents, the truth is that the optical ones require less software trickery for optimal performance.  The Fusion Engine setting further contributes to the enhanced mouse speed. If I have to point one setback to the Hyperion Fury, it would be the lack of ability to set individual DPI levels for the X-and Y-axes.

There are quite a few differences between the G402 Hyperion Fury and the G502 Proteus Spectrum. The former is better optimized for first person shooters, while the latter is an all-purpose gaming mouse. Also, the Spectrum is considerably heavier than the Fury (especially if you take into account the additional weights), meaning the Fury is the better option for FPS matches. The Spectrum has a total of 11 buttons, but I don’t believe FPS players would be utterly impressed by that. To wrap up, if you switch between genres often, the G502 Proteus Spectrum (our review is a click away) is the better option, if you are an entirely fps player, go for the Fury.

Q: Can the LEDs be turned off?

A: The LEDs can be turned off via the Logitech software. At the time of writing, that feature is not available for Linux

A: The Hyperion Fury is one of the best gaming mice for CS: GO and first person shooters in general. It is lightweight and allows quick sensitivity changes.

Q: Is the mouse suitable for non-FPS games such as WoW?

A: The mouse is better optimized for first person shooters. As for the other genres, it is a matter of personal taste. If you are looking for a MMO/FPS approved mouse, you’d better have a look at our Roccat Leadr review.

Q: Can the Hyperion Fury work with Mac?

A: Yes, the mouse is compatible with Mac

Is the G402 Hyperion Fury Worth the Purchase?

Logitech has done a wonderful job releasing a quality mouse that is perfect for FPS gamers. It weighs the moderate 108 grams, the buttons are well-spaced out and the DPI shift button comes in handy, too. The 32-bit processor and the onboard storage make the perfect fit for first person shooter fans.

The Logitech G402 Hyperion Fury won me over with the decent range of features, the build quality, and the sensible price. To sum up, the only thing you will regret is not having purchased it earlier.