G433 is the result of Logitech’s genuine effort to craft a headset that fits into the lifestyle of casual gamers and modern urban people alike. Read our review and check if it ticks all the right boxes. 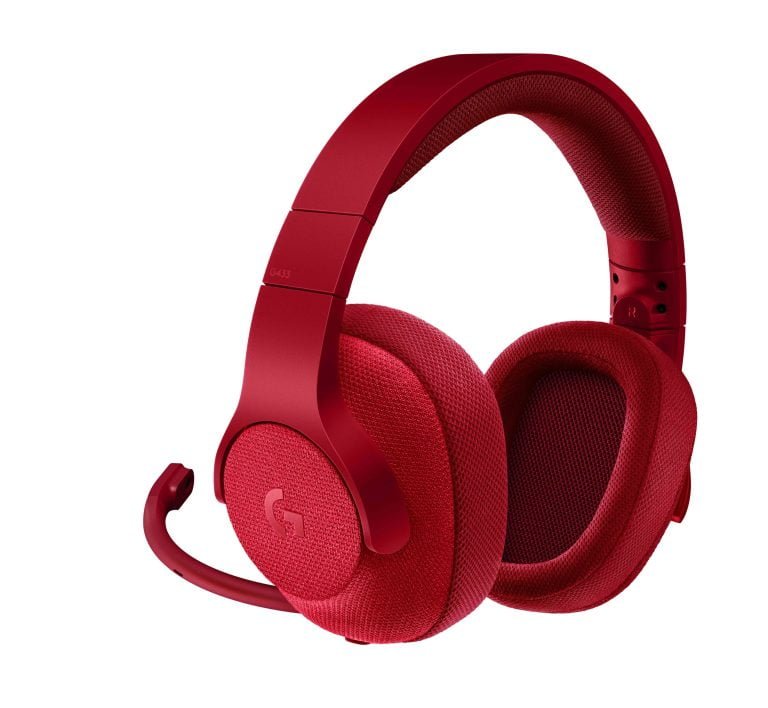 The G433 headset is the latest piece of gaming gear Logitech added to its ever-growing portfolio. Now, I am pretty excited to share my impressions and tell you all details you have to keep in mind before making a purchase.

Logitech G433 is all about balance. If you don’t have a pile of spare cash to spend on gaming headsets for PC and consoles and get yet another pair for outdoor use, give G433 a chance. G433 appeals to gamers, but I guarantee that non-gamers who love listening to music on the go will not feel embarrassed by the headset’s design.

Logitech has tried to find the balance between affordability and the integration of all essential features that would make the G433 an all-rounder headset. I do not know many people who have separate headsets for gaming, listening to music, watching movies, and outdoor use.  It seems G433 offers all these features under one roof. Not bad at all.

After such a great product introduction, you may think that Logitech has crafted the most sophisticated headsets that would blow away the competition. Well, that is absolutely possible, but the truth is that the headset has its faults, too. Keep reading and check whether G433 will give you an edge over the competition or it is a middle-of-the-road product that would be a good fit for a music lover who just happened to be a casual gamer.

If you want to find out more details about the Logitech G433 Gaming Headset before buying it, read the review below.

The G433 comes with 7.1 DTS Headphone:X technology and a USB sound adapter. The headset is fully compatible with PC and PS4, and Xbox One consoles. No matter if you are a PC gamer or a console player, G433 is a sheer joy to use. It offers a plethora of connectivity and customization options as well as a detachable microphone you can leave at home and use the headset for listening to music on your way to work.

The first thing I noticed about the G433 was the distinctive color that sets it apart from the majority similar products. Of course, G433 is available in classic black color, but you can also choose between red and blue. Camo blue is available at one particular retailer only.

The top of the headset is made of plastic material, and the underside of the headband is covered with cloth-covered foam. The ear cups are replaceable, super flexible and you can rotate them through 90 degrees. The headset ships with cloth and microfiber pads. I have to admit that ear pads swapping gave me a hard time. I wish it was easier to take off the pads that are already on the headset.

If my sole purpose was to convince you to make a purchase, I would say that these are the most luxurious headsets in this price category. Well, I am not going to say that just because it does not correspond to the truth. In point of fact, the headsets felt a bit cheap to me. With that being said, I cannot deny that the ear pads provide the necessary comfort during long gaming sessions. I did not feel excessive heat whatsoever.

You must have noticed that the majority of high-end models have some space to allow better airflow. The G433 headset has a similar port located right behind the headband.

The G433 is covered in a sports mesh. Well, this is kind of a weird design decision, some of you would say. At a first glance, it is. However, the sports mesh helps you keep the headset clean. Trust me, this is a perk you will appreciate that after a few months of usage. The stains can be easily removed with a damp sponge.

Don’t forget that the headsets are wearable outdoors and Logitech has diligently done its homework. A few raindrops will not damage your headsets.

The G433 headset arrives with two interchangeable headphone cables. The PC cable features a volume dial and mute button. The cable for mobile devices comes with a command button. The in-line mic seems fine to me although the lack of a volume control option is a bit irritating. The boom microphone for PCs is detachable. Fans of PS4 and Xbox One can take advantage of the boom microphone and the 4-pole 3.5mm cable. For PC players, the utmost solution should be the included USB DAC for 7.1 virtual surround sound.

The microphone offers active voice canceling feature. Your teammates or the people on the other end of the chat will not hear any environmental noises. The included cables also have a five pole double-grounded system. In other words, the only sound sent out over the microphone will be your voice.

The G433 microphone also has an in-built pop filter. This pop filter is pretty much like the black balls of most microphones. The good news is that this one is unobtrusive.

The pop filter does a good job when it comes to blocking out the sounds of mouth breathing, too. I am sorry folks, but I did not test the headsets while eating potato chips. Still, I guess they would score admirably.

Another thing I liked about the G433 was that it spared me the creaking sounds. Most headsets require you to stand still and every body movement causes a frustrating creaking sound.

Frankly, the mic input level was a bit too low for me and I was disappointed to find out that there was not a boost toggle. However, if you use a PC, you can go to the microphone properties settings, find the Automatic Gain Control option and have this issue solved.

I truly enjoyed how well the headset blocked the background noise. Although G433 has its faults, I dare to compare it to Corsair Void and HyperX Cloud II. That being said, I consider the Logitech product the most versatile out of the three.

The sound G433 produces is not too bassy, but it does not break up with the higher notes either. If you are a PC gamer, you will like the DTS Headphone: X support and the 7.1 Surround sound. The ability to hear explosions and gunfire loud and clear improves your chance of defeating your enemies in a game. Outside gaming, the G433 scored pretty well, too. I switched between a wide range of music genres and can say that I experienced minimal frequency distortion. If you are a fan of a music genre most people around you loathe to think about let alone to listen to, the G433 is a good choice. The cups isolate the sound pretty well, so the disturbance of your family or roommates is kept to the minimum.

I tested the headset in multiple games- Gears of War, Battlefield 1, and Prey being among them, and I enjoyed a truly crisp sound. Apart from PCs, the headset worked great with consoles, too. You will not get a virtual surround due to the availability of a USB soundcard, though. You have to plug the 4-pole connector into the console. If you wish, you can plug the mobile cable into the Xbox One or PS4, but personally, I prefer the PC audio cable. Not only the boom mic sounds better, but I also like the mute switch and volume dial it features.

If you are looking for headset suitable for heavy in-game use (MMO raiding, for example) and listening to music on the go, give G433 a shot. The virtual surround improves the soundstage in games and I am pretty sure Mass Effect: Andromeda fans will appreciate it. The in-line microphone is also a great solution for in-game chat.

The 7.1 surround sound adds a sense of depth when you play Prey or you want to locate the origins of the distant shots in PlayerUnknown’s Battlegrounds. However, if you are listening to stereo-only sources on the PC, you’d be better off if you disable it.

I found it a bit challenging to get the headset recognized on my PC supporting Windows 10, but I am likely to believe the problem was on my end. Anyway, no need to babble about that.

You can have your headset up and running without fiddling with the Logitech Software, but if you want to make the most out of the DTS Headphone:X virtual surround, you have to use the USB adapter and spend some time adjusting the settings to your personal taste.

If you own any other Logitech-branded gaming peripheral, chances are you already have an idea of how that whole software thing works. The software app works as a hub for all Logitech devices you use. As for the headsets, you can choose between six EQ profiles- FLAT, FPS, MOBA, Drop the Bass, Cinematic Gaming, and Communications, respectively. You also have the option of building your custom profiles.

Apart from that, you can set profiles per game, and adjust your EQ settings to load automatically when you load a certain game, enable or disable the DTS Headphone:X. Needless to say, you will find options for controlling the volume, the mic input level, as well as the sidetone.

Final Verdict: Is Logitech G433 Headset Worth the Purchase?

All in all, G433 is suitable for long gaming sessions, but personally, I consider the construction to be a bit on the cheap side. Don’t get me wrong, though. The headset feels solid. It was probably the plastic that made me jump to conclusions.

G433 is the most lightweight Logitech headset I have tested so far. To write an informative G433 review, I wore the headset for a couple of hours. I expected to have a neck pain as if I have entered a weightlifting competition. Luckily, such a problem did not occur. However, there is one detail I consider it relevant to tell you about. If you wear glasses, keep in mind that the headset may squeeze the frames a bit.

To sum up, G433 is a good value for money as it combines flexibility, versatility, and affordability. It works well with PC and consoles, and you can easily plug the headset into your mobile device (Sorry, iPhone 7 users) and listen to music during your daily commute.

Well, okay, the price might be a bit high for a wired headset, but if you need a solid, lightweight, all-around headset, the Logitech G433 is worth every penny. Apart from the plastic build, I did not find any serious disadvantages I can bring to your attention. All in all, G433 is the perfect device for multiple applications. If you have ever dreamt of bringing your gaming headset wherever you go, Logitech G433 is an option to consider. 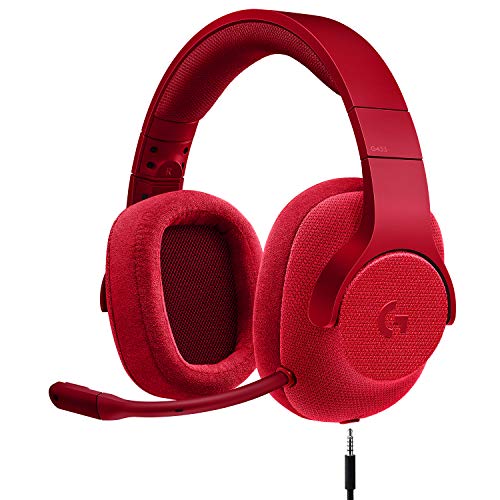