When I came across the Logitech G935 for the first time, it immediately reminded me of the Logitech G633. The resemblance is uncanny, and I even thought that I was looking at an upgrade. However, that was not the case. When I came across the Logitech G935 for the first time, it immediately reminded me of the Logitech G633. The resemblance is uncanny, and I even thought that I was looking at an upgrade. However, that was not the case.

The Logitech G935 has a list of features that will appeal to most gamers out there. From its wireless connection to its DTS:X 7.1 Surround Sound capability,  the possibilities of great gaming immersion are at hand. So, let’s see what this rodent has in store. 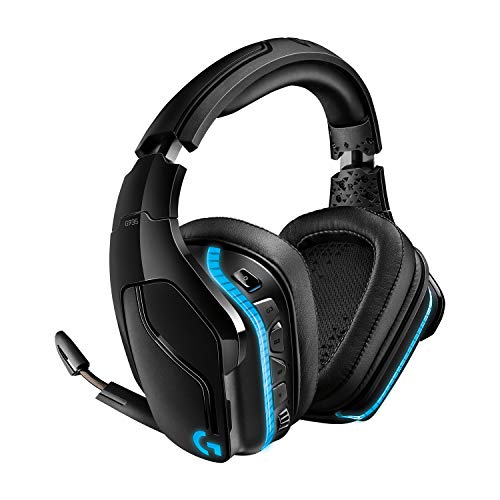 The Logitech G935 wireless gaming headset is designed without too much flair and, at the same time, not too conservative that it loses the gamer vibe. But it is also true that it is one of the bulkiest headsets I’ve worn. At 13 ounces in weight and 7.8 x 4.2 x 9.1 inches in size, it is quite hefty.

Fortunately, despite this, it remains comfortable even during long gaming sessions. This is thanks to the generous cushions, which, however, some people may find a bit tight.

The headphones are not really outdoor-friendly.  And being bulky and unfoldable, they are not exactly portable either.

Despite being somewhat plasticky, the headband is super flexible. At the same time, it is sturdy thanks to the metal frame reinforcing the build.

During testing, the headband was somewhat too snug for my average-sized head, so bigger sizes might feel uncomfortable. The cushions did soften the grip and provide comfort, though.

Because of the slightly tight fit, the earcups of the headset create a good seal around your ears. And although this translates into passive noise canceling, it also equals poor airflow inside the earcups and building up of heat.

Regarding wrapping, Logitech opted out of mesh fabric and decided to use pleather, which is a plastic fabric made to look like leather. During testing, I did not sweat profusely, but my ears were quite warm.

The G935 has great controls; the buttons are easily mappable and offer loads of gamer-friendly options. The controls include a volume wheel, a mute mic button, and three mappable buttons that you can set to practically whatever the official software allows you to. The buttons are tactile, with ridges, which makes it easier to differentiate between them.

Audio performance weighs the heaviest when choosing your gaming headset. And the G935 shines in this department. Armed with DTS:X 7.1 Surround Sound, it delivers an amazing game immersion. During my Sekiro marathon, I enjoyed the superb surround sound capabilities, and I could really feel the chill in horror games like Alan Wake. Respectively, in FPS gaming, the surround sound gave me a superior tactical advantage.

With its 50mm Pro-G drivers, the G935 has a solid bass range performance. There is a certain bump in the mid-bass that adds a punch to bass guitars and drums. However, I noticed that the sound was a bit leaky at max volumes.

Those who love Discord and in-game chats can rely on G935’s mic for good quality. In quiet environments, this microphone sounds natural and detailed. However, if your battle station is somewhere noisy or if you want to use it for streaming, that might be a bit of a hiccup.

If you need a reliable microphone for streaming purposes, or just want a separate mic, I suggest you read our article on this topic.

The Logitech G935 has a wireless range of 61 feet, which allows you a good degree of mobility. You can connect wirelessly via a USB dongle that you can store inside the cups, or you can use the headset wired via the included audio cable.

The G935 is compatible with the Logitech G Hub app that is available on Windows and Mac. This software is one of the most comprehensive ones out there. It offers loads of customization options like surround sound, a 10-band EQ, and control over your fancy Lightsync RGB lighting.

You also get tons of options in mapping the headphone buttons to different sound profiles, functions, or whatever commands you can think of. You can quickly start programs, games, set macros, manage your playlists, and so on.

The G935 has an adequate 13-hour battery life without the light show, which is okay for most gamers. According to the specs sheet, with the RGB on, you should get about 8 hours of usage.

Once you run out of juice, the battery needs about 4 hours of charging. Alternatively, you can use the headset wired in case the battery is dead. However, you won’t have access to its app and any active features.

The G935 has excellent audio performance and is a great pick for immersive gaming. However, these over-ear cups are bulky and not exactly breathable. Also, for some, they may feel a bit tight.

But make no mistake, this is a gaming-grade headset, so it has great quality and very low latency, even with the USB dongle. The G Hub app offers multiple customization options. The Logitech G935 is unmistakably designed and created for gaming purposes, and fortunately, it can be used with every console and PC.