The Lighting and Sensor Specialist These are the superstar gaming mouse models that will instantly pop up in your mind whenever you hear the name of a certain brand. Razer has the Deathadder, SteelSeries will evoke the …

The Lighting and Sensor Specialist

These are the superstar gaming mouse models that will instantly pop up in your mind whenever you hear the name of a certain brand. Razer has the Deathadder, SteelSeries will evoke the image of Sensei, while Corsair is known for the M65.

Another big gun, ROCCAT, is known for the Kone. The ROCCAT Kone AIMO is a cost-efficient mouse that can be called a jack of all trades. It is a great valued rodent loaded with an effective sensor, solid ergonomic design, and amazing lighting.

Wouldn’t you just want to find out what was it that made the Kone so awesome it managed to shoot the brand to the stars? 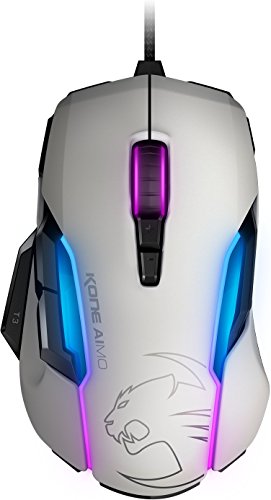 The Kone AIMO is ergonomically engineered to match the natural contour of the hand. The ROCCAT brand is undeniably among the best when it comes to solid build quality. Like the ROCCAT Leadr, the Kone AIMO is built like a tank. During my test, I recorded no squeaks, nor creaks. I’m a heavy user and good thing this mouse doesn’t have rattling or any pre or post-travel. Everything feels in place with no screws out of line.

Note, this is not an ambidextrous mouse. Lefties might not feel at home completely. But right-handed gamers will love how it fits nicely to their palms.

Design-wise the Kone AIMO is available in black and white. The surface is not rubberized, yet it feels soft to touch. I noticed that it attracts greasy fingerprints easily, good thing cleaning is a simple job.

This mouse packs the ROCCAT® Owl-Eye optical sensor with a 12,000dpi. It also has a 1ms response time and 1000 Hz adjustable polling rate too.

Officially it is the Pixart 3361, a new version of the 3360, regarded as the world’s best sensor.

I’m sorry to break it to you, gamers with lighter mice preference, but there are no customizable weights available. The full 130g weight of the Kone AIMO might be too much for some. I myself like it how the bulk feels.

Its dimensions are 5.1 x 3 x 1.6 inches. Quite a handful, yet I experienced no discomfort whatsoever. Then again this is all matter of personal taste.

The Kone AIMO has a total of seven buttons. The scroll wheel has three click switches, so the number can be totaled to ten. The buttons are crisp and tactile, and you will have no problem actuating them. I wish they made the scroll wheel a bit bigger, as I found it too small compared to the overall size of the mouse.

On top, there are two DPI buttons. There are also backward and forward buttons on the side. Below the thumb grip on the left-hand side, you can see a button that has functions like the Razer’s Hypershift. This button can trigger a secondary function, called the ‘Easy-Shift’.

Under its hood, the Kone AIMO packs a high-end optical sensor called the ‘Owl-Eye’. Though it sounds super cool, it is just a codename for the PMW3361 which is based on the PMW3360.

This sensor is notably flawless. It is responsive and works without any glitches. Its supposed maximum tracking speed and acceleration values are 250 IPS and 50 G, respectively. During my gameplay, the Owl-eye has done its job quite well. My aiming in Battlefield 4 is less shaky, and I noticed no lags in tracking. The extra buttons also made my Elder Scrolls Online experience better, not to mention how accurate the performance was.

Resolution can be changed from 50–12,000 CPI with increments of 50 CPI. Those who are fussy with polling rate can set them to 125, 250, 500, and 1000 Hz. There are players who are fond of angle snapping, you can turn it on if you like, but I always opt to leave it off as it affects my performance negatively.

This is not a wireless mouse. The Kone AIMO has a braided cable. Make sure you take good care of it, as it is not replaceable. The cable is fairly long at 1.8 meters, and even though ROCCAT dubbed it as the ‘Flexi-Cable’, it is quite stiff.

Allow me to tip my hat off to ROCCAT team, the lighting work on this rodent is amazing. You can tell that they’ve put a huge amount of effort into designing it to operate perfectly.

Unlike other brands that do the normal breathing patterns and whatnot, the Kone AIMO has stepped up its RGB game.

This mouse will react dynamically to whatever operation you are executing on your PC, be it a firefight in PUBG or casually looking at sweet cat pics.

Aside from the unique lighting behavior, the lighting itself looks extraordinary. The individual LEDs are not visible, the frosted plastic that covers the multiple RGB zones does a great job in refracting the light.

Overall it looks fresh and refined. The plastic body with black accents has made the whole lighting affair pop out. All these features can be tweaked using the ROCCAT Swarm app. It is only available for Windows, and not for OS X.

Using this software, you can also manually program-in macros. This is very useful for MMORPG junkies who prefer their mouse with tons of programmable buttons.

League of Legend players will be delighted to know that there is a premade profile for the well-loved MOBA. Still, if you want to customize, the ROCCA Kone AIMO has four profile slots available. Setting up these profiles is easy, and the Swarm app is quite friendly, once you get over the learning curve.

The ROCCAT Kone AIMO is a fantastic upgrade on the original 2007 design – fresh, and quite likeable. The lighting will also up your gaming experience.

Is this mouse worth your time and cash? Well, when you consider the ergonomics and how it can dive in and out of any genre, then this is a great buy.

The sensor is superb and aesthetics – excellent, but the weight and size might be a deal-breaker for some. If these are minor hindrances that you can live with, then the Kone AIMO is well worth the dough.