Kova is Roccat’s response to the high demand for inexpensive, ambidextrous mice for FPS and MOBAs. Read our unbiased review and get to know its bells and whistles. 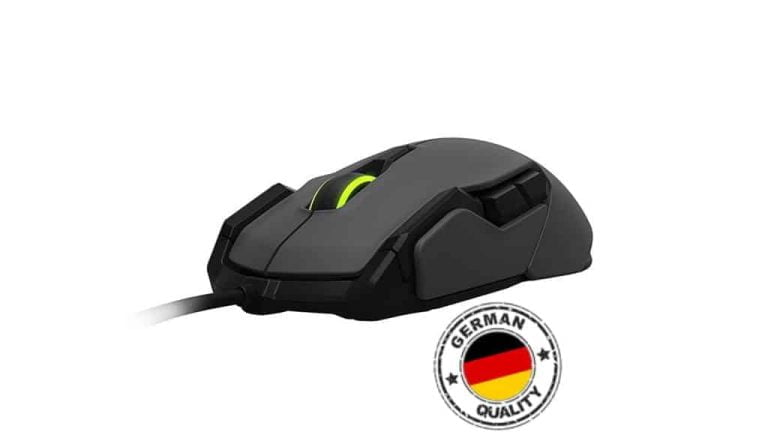 Roccat is not among the most popular manufacturers of gaming merchandise, which is a shame, as the company has rolled out some cost-effective models that can be competitive to the most established brands on a global scale.

The latest edition of Kova is a vivid example of company’s efforts to combine simplicity and functionality. If you consider the first person shooter mice too basic and the MMO-specific ones too bulky, you will like the Kova. If you are curious to know what made me include it in my list of good cheap gaming mice, keep reading and get to know its value-added features.

If you want to find out more details about the Roccat Kova Gaming Mouse before buying it, read the review below.

Finding a good cheap gaming mouse is a no-brainer if you are right-handed. All too often, lefties are out of luck. Not this time. If you are a leftie, you will be delighted to know that the Roccat Kova is a beautiful ambidextrous piece of computer equipment. It may lack some of the premium features of the other budget models I have reviewed, but it is unbeatable in terms of ergonomics.

The button placement works well for palm and claw grippers and the mouse feels equally comfortable in either hand.

Can you name the most uncomfortable gaming mouse you have ever used? I bet you still remember the strain on your wrist after a weekend getaway in the fascinating world of e-sports. What I am trying to say is that poor button placement can be a real deal breaker. Luckily, that’s not the case with the Kova. The button layout is, without a doubt, one of its admirable features.

The mouse comes with a total of 12 buttons: eight standard buttons; a scroll wheel; DPI switch, and two secondary buttons on each side of the right and left clickers. If you are into MMOs, you will love the number of buttons but keep in mind that 2 of them are a bit hard to reach.

Six of the buttons mirror each other in location. Two of buttons are located next to the right and left clickers and the other four are just above the thumb/ ring finger. The two thumb buttons are perfect for lobbing grenades or quick melee attacks. At first, I thought that such a placement is an invitation to trouble. Later I figured out that the buttons are actually pretty well-made, so the chance of misclicks is greatly reduced. Still, if that’s a bother, you can simply disable them.

The button that allows you to cycle through the DPI settings is underneath the scroll wheel. On the downside, the Kova does not have a DPI indicator, so it is a bit difficult to tell which DPI setting you are on. The scroll wheel itself is pretty basic, no left or right tilting function.

Now, let’s say nice things about the Easy Shift [+] mode. When you squeeze the respective button, the button functions jump to 22. Hardcore gamers will definitely fall for these functions although memorizing all of them should be regarded as an act of heroism.

Roccat Kova is a corded gaming mouse. You have to connect it to your PC by plugging the cable into the USB port. If it is of any help, the cable itself is 1.8m long.

Most gaming mice use laser sensors, but the Kova uses an optical one allowing a maximum DPI of 3,500 and a 1000Hz polling rate. The Overdrive mode enables you to fake the DPI to 7000, though. For most gamers 7000 DPI is enough, so the trade-off between decent DPI and low price seem fair enough.

I tested the Kova in Overwatch and it performed well. However, I turned off the acceleration and my base setting was 1500 DPI. The other game I tried was The Witcher 3. In both tests, the tracking remained consistent and accurate. Still, optical sensors pale in comparison with the razor sharp accuracy of the laser ones.

Folks, I am telling you, the software is a major headache. You have to second-guess in which tab the function you need might be. Luckily, the mouse comes with an onboard storage, so once you have it up and running, you will not have to fiddle with the Swarm software settings so much. The software enables you to set key binds, combos, macros, adjust DPI and polling rate, etc.

There are five profile spots available. If that’s not enough, you have no choice but to start saving, importing and exporting.

It is true that some of Kova’s competitors offer superior sensitivity and build quality, but the Kova remains the best choice for gamers seeking a compromise between a shooter and a MOBA mouse. In addition, its ambidextrous design makes it suitable for southpaws. So, if you can get past the software, the Roccat Kova is a good value for money.