Although the Turtle Beach Stealth 520 isn’t the gaudiest looking headset on the sale, it’s unquestionably one of the top performers out there. In this case, you get what you pay for.

If you have ever searched for the best headsets for PC and console gaming, you must have come across the Turtle Beach brand. The company has unleashed a whole lot of awesome gaming gear, but the model that captured my attention was the Stealth 520 wireless gaming headset. The latter is tailored to meet the high expectations of pro gamers and casual players, but there is a small and yet important detail. The Stealth 520 is compatible with PlayStation 4 only. So, if you are a PS4 player and you are looking for a headset to elevate your gaming, I would suggest checking out Stealth 520 strengths and weaknesses. 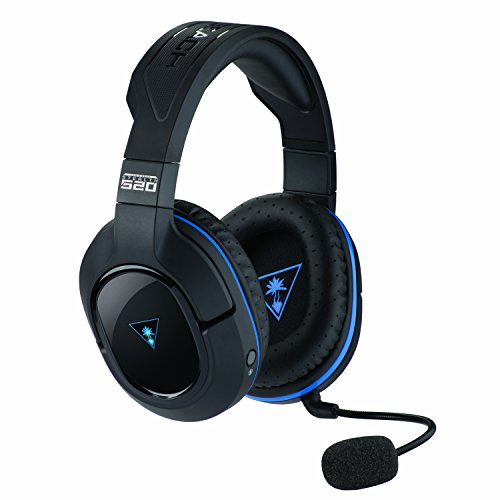 If you want to find out more details about the Turtle Beach Stealth 520 PS4 Wireless Headset before buying it, read the review below.

If I have to point one thing that sets Turtle Beach peripherals apart from the crowd, that would be the design. Each headset the company rolls out looks elegant and feels really comfortable.

It seems that Turtle Beach is among the manufacturers following the rule that “Simplicity is the ultimate sophistication”. The Stealth 520 sports a, straightforward design. It comes with padded extendable headband and blue highlights on the black chassis.

The Stealth 520 possesses a detachable boom mic that works fine, although there’s a lot of room for improvement. However, I believe that the biggest selling point of Stealth 520 is the wireless adapter and the 15-hour battery life. The wireless adapter can plug into a digital audio port. I am not saying it is a way superior to common USB adapters, but it is a nice asset anyway.

It is essential to note that the PS4 Slim model does not have a digital audio port. In other words, the Stealth 520 headset might not be the best investment for Slim model owners.

The Stealth 520 headset comes with plenty of modes. Eight, to be precise. Users can choose between game, stereo, movie, music modes as well as bass boost, normal, treble boost, bass and treble boost for stereo systems.

As for the button placement, the Stealth 520 is not a big departure from its predecessor. You can turn the headset by pressing the on/off button on the right ear cup. If you press the button once, the Superhuman Hearing is activated. The front part of the right ear cup also houses the mute button, while the game and chat audio buttons are on the back.

The earcups are comfortable but the expandable headband felt a bit rigid to me. If you wear glasses, it might take you a while to get used to the slight pressure on your temples.

The ear cushions themselves are circumaural meaning they go wrap up your ears. The lush padding protects your ears against getting hot or sore. If you have ever worn low-quality headsets for 5-6 hours, you must know how unpleasant it is to have your ears sweaty even in a well-ventilated room.

Other than that, the headset is pretty durable. The matte plastic is scratch-resistant, the moving parts are solid and overall, you should not encounter durability issues even if you use the headset every day. Of course, if you are a quick-tempered gamer and your gear often falls victim to your anger, you should not expect the headset to endure continuous abuse.

During my tests, I was desperately seeking for pitfalls in this seemingly sophisticated device and I couldn’t find any. However, things have changed when I explored the microphone capabilities.

Essentially, the microphone is the greatest setback of the Stealth 520. The problem is that the mic is always on. Even if you mute it or turn the volume all the way down, you will still be able to hear yourself speaking or breathing. If it is of any help, the sound quality when you speak is satisfactory. However, if you are keen on multiplayers, you have two options. You can either put up with the sound of your breath or play without voice chat.

Now, let’s move to the Mic Monitoring feature. The latter enables you to hear everything you say so that you can identify if you are speaking too softly or too loudly.

If you want to activate the Superhuman Hearing function, press the button on the right side. I did not find a significant difference between the Superhuman hearing and the 7.1 surround effect, but after all, I am far from being an audiophile. Still, if you want to get a better idea of the difference between these two functions, I recommend testing the headset in games such as Battlefield 1. I have tried the Superhuman Hearing in Titanfall and found a significant boost to the sound of the footsteps before and after activating it.

Unless you are a hardcore audiophile, the Stealth 520 sound quality is just fine. Well, you will have to take your time to adjust the treble and bass settings, but once you have the headset up and running, you will enjoy reasonable balance, hard-hitting bass, and crystal clear speech.

As far as the surround sound is concerned, I was pleased with Stealth 520 performance. You have two types of surround sound broadcasts: Matrixed and Discreet, respectively. The Matrixed audio is extrapolated from a single channel. In other words, you will get some sense of direction where the sound is coming from but you will not be able to separate different elements.

If you opt for the Discreet mixing, each of the seven directions will have its own audio stream. You will be able to hear a character speaking directly in front of you, while a vehicle zips by you in a different direction.

As for the Superhuman Hearing option, fans of first person shooters will totally fall for it. It will definitely help you figure out the direction or the gunfire or the enemies sneaking behind you. I would not recommend using the Superhuman hearing all the time, though. Of course, when the situation is tense and you need to be on your toes, turn the Superhuman Hearing on. In all other instances, keep it off and enjoy the game the way it is meant to be enjoyed.

When you are done with the irritating setup process, you will enjoy a great in-game performance. I tested the headset in Star Trek Online, Mass Effect Andromeda, and Dark Souls 3. The headset did a great job with helping me tracking approaching enemies just by the sounds they make.

In Dark Souls, I was able to hear wolves’ far cry well in advance before they entered my line of sight. As for headset’s performance in the multiplayer of Mass Effect Andromeda, all I can say is that I heard kett soldiers from miles away.

Keep in mind that you would not be able to make the most out of the games unless you dedicate some time to adjust the sound modes.

I know I have explicitly stated that the headset is compatible with PS4 consoles only, but the truth is that you can make it work with your PC too. You need to download new firmware for the dongle and the headset and restart a few times. Still, I would recommend getting a PC-dedicated headset for optimal performance.

And here we come to the clunky PS4 setup. While most wireless headsets require you to plug a USB adapter, the Stealth 520 setup comes with a few additional steps.

The first thing you have to do is to plug the included transmitter to the optical port of the PS4 and turn the device on. Also, you have to explore the options available in the audio devices menu and route the sound through Chat Audio instead of All Audio. If you want to activate the DTS feature, you also need to enable the Bitstream.

As for the battery life, it is estimated at 15 hours on average. Still, intensive gaming and loud volume affect the internal battery and lead to faster draining.

Is Stealth 520 Headset Worth the Purchase?

Turtle Beach Stealth 520 headset produces decent sound quality. The ability to adjust the game and chat audio on-the-fly comes in handy, too. However, if you are a console gamer who has both PS4 and Xbox One, the Stealth 520 might not be the best choice. If you are solely a PS4 player, I doubt that you will find a better product designed especially with PS4 consoles in mind. FPS gamers will definitely appreciate the Superhuman Hearing function that gives them a discernible audio advantage over the competition.

As I have already mentioned, the mic is a double-bladed knife, and the UI structure may cause you some difficulties with customizing the headset. Having said that, once you figure out the setup, the Stealth 520 is a sheer joy to use.

All in all, the headset lands in the happy medium between reasonable price and availability of advanced features. If you are a PS4 player and the premium-quality audio is your top priority, the Turtle Beach Stealth 520 is worth every penny.