Headphones on. Good vibes on. Let’s do it, let’s wrap our heads around what’s been my real-world fantasy lately – the PC building!

I’ll leave my personal introduction for the closing part of this article, where I also intend to leave it up to you to choose the direction in which you’d like to see this new geeky endeavor develop.

I will just share with you that building “Karen” – no jokes here ?, that’s how I named my personal build, took me almost a year and a lot of “buy expensive” – “sell cheap” moments till I could finally say I have what suits my needs best and last but not least, brings me the joy and pride to call my creation. And if you are wondering where does the name “Karen” comes from – you will find out in the end.

Having all that said, I realized that if I had a better idea how things will look and work like, that would have spared me a lot of money, effort, and frustration – because trust me with that one, building a PC can squeeze every drop of perfection one is capable of.

And there we go, today what I’ve picked for you is a true masterpiece to start with. If I had to compare this build to a fairy tale character that would definitely be the Snow Queen – beautiful, powerful and cold. I’ve intentionally put my choice on a configuration with almost no modding involved (just some tiny performance tuning), but still visually stunning. 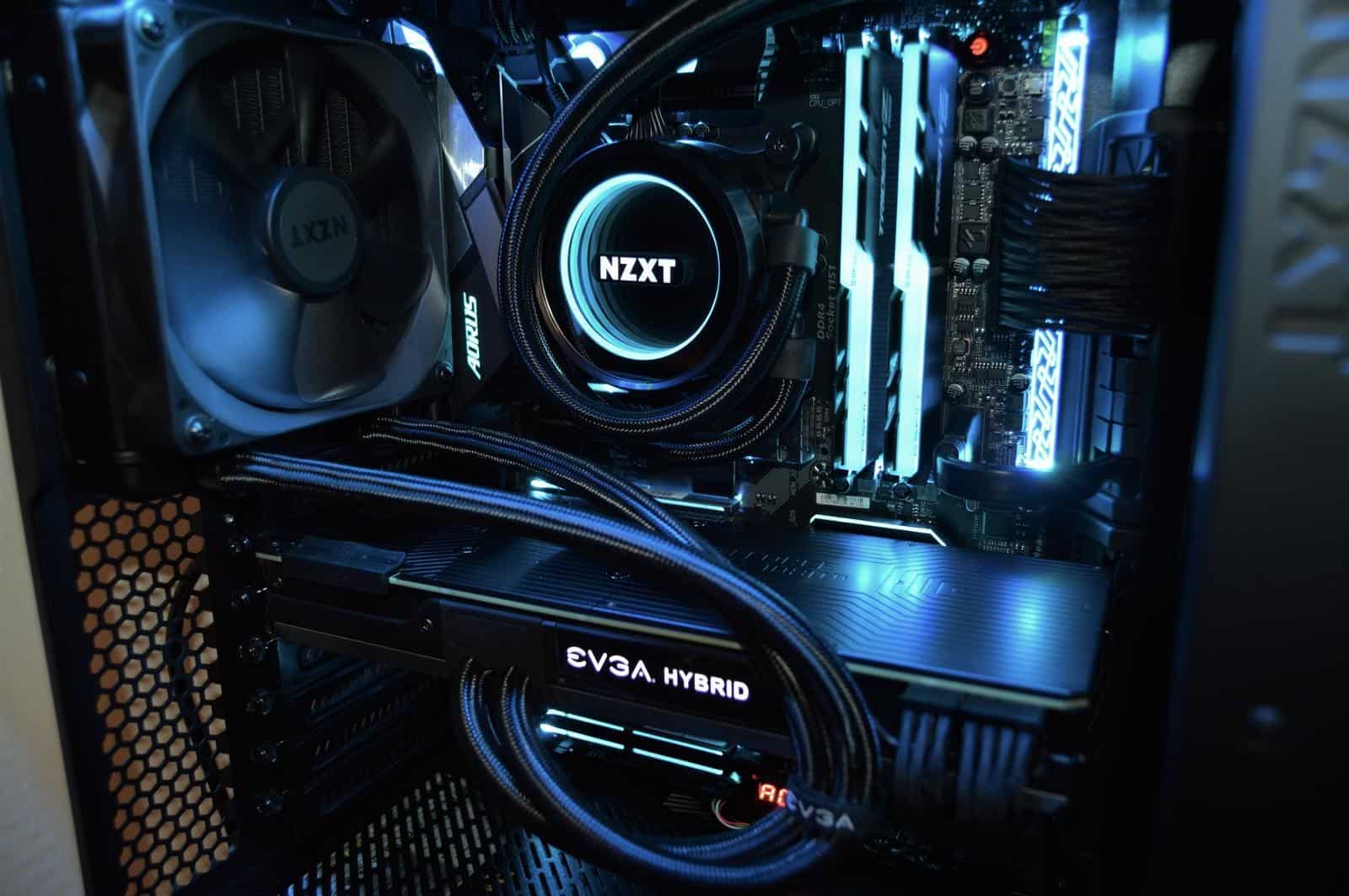 Fractal Design – Meshify C, the new ATX Tower of the company that basically “defined” the silent and dustproof gaming with their well-known Define series. I have always admired their designs and yet when I saw this one – I almost felt like I want to live in one of those. It’s absolutely magnificent and combines almost every hot trend in the classy designs lately, the mesh front panel that the guys at Fractal describe as “black diamond facets” – sweet, the full-tempered glass side panel and last but not least, the complete and hopefully even improved legacy in matters of silence and cooling we’ve used to see in the Define C models. The letter “C” in the name presumably stands for Compact as looked from the side it’s a bit shorter lengthwise than the most ATX towers currently out there.

No blank shots here, it’s Intel’s “fearsome” response to the AMD’s Ryzen family – the i7 8700K, a mighty chip, no doubt. As I’m not aiming to open an AMD vs. Intel dispute here – I will only bring the main differences between the new mainstream i7 line of intel and its direct predecessor the i7 7700k. Featurewise, the only difference is the introduction of HDCP 2.2 support – hurray, I guess? But wait, we’re getting there – at last, after a decade of quad-core Intel mainstream processor platforms we have the so heavily desired hexa-core line on a mainstream price. So, more cores, more threads, more cache, upped standard DDR4 memory clock, increased out of the box core frequencies and all that with basically the same power consumption and TDP for around 20$ price difference compared to its predecessor presents a perfect choice for a brand-new build.

Intel has launched its “Coffee Lake” processor line alongside the Z370 Express chipset, the less expensive B360 and H310 models will be first available in Q1-2018. What is worth mentioning here is that neither Intel’s 8th gen processors nor the 100/200 chipset series of motherboards are backward compatible, even though they share the same 1151 socket. To keep it short, the main reasoning behind that according to Intel are the new requirements of power distribution.

For the build of our review the choice falls on the Gigabyte Z370 Aorus Gaming 7. The truth is that by the time of the build it is one of the few “Coffee Lake” compatible boards available on the market, but that doesn’t make the choice limited by any means. The board, however, is nothing less than top notch. The application of Intersil’s new 60A Smart Power Stages and digital PWM along with the 76A inductors which are typically found only on the high-end X299 motherboards represents a high-quality VRM capable of taking the 8700K to its max without hesitation.

With the parts seen already and the ones to complete this build, the memory of choice would naturally go to one of the top offerings on the market the G.Skill – Trident Z RGB 16GB (2 x 8GB) DDR4-3200. One of the most reliable and well-known DIMM memory producers globally over the past few years. The Trident Z series DIMMs are powerful product series aimed at a very specific group of people, the ones that want the fastest stuff at the high-end of the spectrum that will pay special attention to design, as honestly the looks of these kits are purely amazing. Yes, they will be more expensive than that average 2400MHz memory modules being offered, but for that not so drastic difference in price you receive DIMMs with a lifetime warranty and that configurable RGB system, that to me personally is simply the best.

Those of you who haven’t managed to identify a monster core hardware component yet, should definitely look at the GPU offering – the EVGA GeForce GTX 1080 Ti SC2 Hybrid Gaming! It’s a graphics card that establishes EVGA’s commitment to innovate and push the envelope of high-end cooling for the enthusiast segment of graphics cards. Coupled with the fact that you can have this much power in the palm of your hand and maintain a superior performance to noise to temperature ratio is nothing short of an amazing feat. Pricewise – it might be not worth it for the vast majority of buyers, but for those of you who are very focused on low noise and high-performance cooling, this is potentially a worthwhile investment.

The pick here falls to Samsung’s – 960 EVO 500GB NVMe M.2 SSD. Unmatched price vs. performance ratio, the only better performing SSD for the moment is the 960 PRO model, which also offers a longer lifespan via the costlier MLC NAND flash. In my opinion, this is not really relevant for the regular user as you’ll need to write closely 180Gb daily in order to bring the 960 EVO to its natural end in the warranty period of 36 months. And keeping in mind that the difference in performance is not that significant, I really can’t see a reason to pay the extra buck for the PRO version.

With all the choices listed above, there is no doubt that we will see yet another top-end part here. It’s the NZXT Kraken x62, arguably the best AIO on the market today. Real world tests report that under heavy loads on the CPU the top models of the main competition in the segment – the Corsair H115iV2 and the EVGA CLC 280 models give 1, 2 degrees better temperatures, but they do that on 2200/2300 RPM, while the Kraken is calm and quiet on 1700 RPM. This should give you an idea how outstanding the model is. Last but definitely not least, it looks amazing and the software that wraps things up is flawless.

Would you assemble anything like this and spare on PSU? I guess not. Powered by the EVGA – SuperNOVA P2 850W 80 + Platinum, this machine is granted power performance that is maybe a bit more compared to anything else near its price point. Excellent voltage stability on all rails, fully modular, extra ordinary ripple suppression and top build quality.

Well, what can I say guys, for the budget of roughly US $2500 and the purpose of the build – gaming at top settings and overclocking, there is probably nothing better you can get. This rig’s benchmarking results speak for themselves, every single part is performing above expectations in the Users Bench and the results in TimeSpy are better than 96% of all scores.

The builder has achieved stable 5.0GHz on 1.34v on the i7 8700K, which is great, keeping in mind the extra 2 cores/4 threads of the chip compared to its predecessors. For achieving that and keeping healthy temps event with Kraken x64 though he took the risk of voiding the warranty by delidding it and applying the Thermal Grizzly Conductonaut TIM under the hood and Kryonaut as external thermal compound. Now even though the 8700K has proved to be an exceptionally well-rounded CPU, there are reports that it runs hotter than it should and that’s even on stock frequencies. Delidding is something that I haven’t done and won’t recommend, however experienced users out there report that after the change of the stock TIM the temperatures of the chip drop sometimes with values as crazy as 30 degrees Celsius. This is an issue and something that Intel was often criticized for in the past and they should definitely pay attention, especially now when they are facing a tough competition in the face of the Ryzen chips from AMD.

Other than that, there’s not much to be said. The builder has clearly demonstrated how a PC that is both a beauty and a beast can be assembled with parts from the mainstream market. Everything else is highly dependent on a large variety of factors and personal preferences like in general a purpose to come up with the hardware, visual ideas to imagine the design and a budget to define the limitations ?

Now let’s see where I belong in this. I am no hardware guru, but just an enthusiastic follower of this hot new trend. My building experience re-started in the beginning of 2017 when I took a deep a dive into a world that has changed a lot since I’ve last seen it – more than 10 years from the day I switched to laptops strictly, because…. Well, because of work, constant habitat change and… whatever. So, in the beginning of this year I decided to take good care of a long forgotten me – the leisure PC user, you know – music, videos, careless browsing and of course – a good amount of gaming. I am now extremely happy with the result and it is not even close to the machine I’ve just presented to you. My new PC serves perfectly what it was purposed for and, I’d bravely say, looks quite nice, too.

There is almost indefinite pool of parts choices for a PC build nowadays and that’s great. However as I mentioned in the beginning, if I could have had a better concept of where I want to get when I started building, it would have spared me tons of time, parts returns due to incompatibility or even loss of money when I was not happy with some of the hardware, but couldn’t ask for a refund anymore.

The “Karen” song as promised:

Where we go next? I’ll be glad if you help me with that by leaving your suggestions and comments below.

Ed has fond memories of the times when he played games on an 8-bit console. If you want to make him talk for hours on end, just ask him about Valla from Heroes of the Storm. Eddie despises hackers and gamers who do not take the game seriously. He sees RealGear as a place where he has the freedom to express his viewpoint regarding PC and console games and put his journalism skills into practice.
You can get in touch at [email protected]

Whether you fancy some intense D-Day action or crave a more in-depth veteran camaraderie journey, there is a WWII game rendition for you. Here I’ve listed the best World War II games with great storylines for PC. Read More