Logitech G633 is the corded counterpart of the well-known G933. If you are looking for a wired gaming headset offering versatility and immersive sound, check our in-depth review. 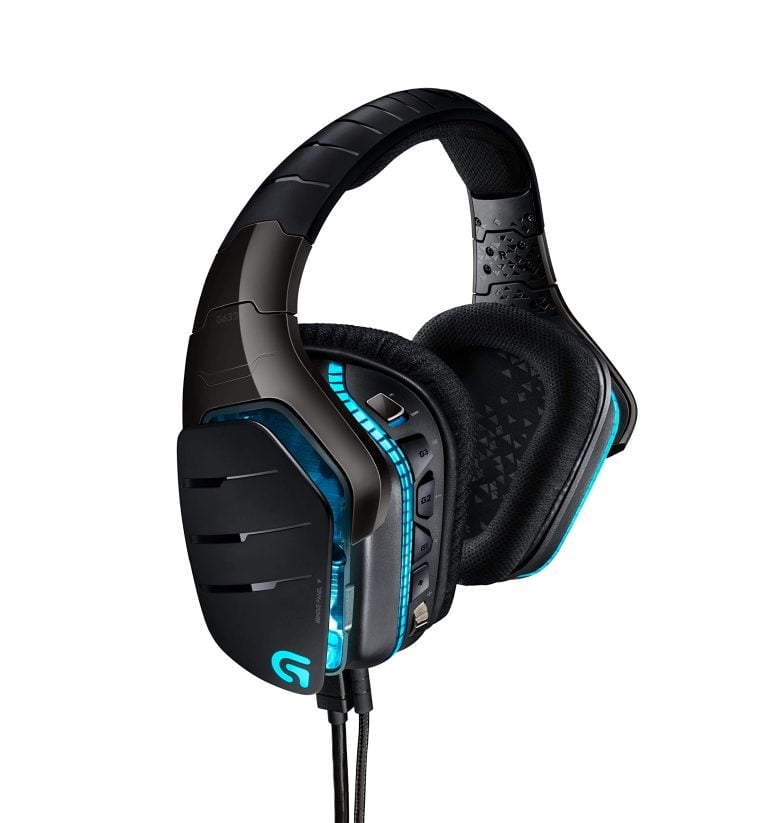 Logitech G633 Artemis Spectrum gaming headset has been on the market for quite some time. What made me consider compiling a review was the fact that despite the great number of newer models, the G633 stood its ground and it is still a popular choice among gamers. But what makes it so versatile and suitable for gaming and non-gaming purposes?

Logitech has gone an extra mile in stuffing the headset with every feature a gamer would need. The G633 features large ear cups, fancy RGB lighting effects, as well as the 7.1 Dolby and DTS Headphone:X surround sound. The headset is compatible with PC, consoles and mobile devices.

However, G633 is a wired headset, which is probably the biggest setback I have encountered. If you are looking for a wireless Logitech-branded headset, I recommend checking out the G933 model. If you are wondering whether the only difference between the G933 and G633 is the price, just keep reading. Although both strike a resemblance to each other in terms of features and design, there are also some differences outlined in the dedicated section below. Before we get to that section, let’s explore the characteristics of the G633 gaming headset only.

If you want to find out more details about the Logitech G633 Artemis Spectrum Gaming Headset before buying it, read the review below.

The Logitech G633 Artemis Spectrum comes with large, comfortable padded band, rectangular ear cups. The ear cups themselves swivel. I would not say the G633 is the most portable headset I have ever reviewed, though.

Another feature that appealed to me was the fact that the headset ships with two separate cables. PC players have a USB cable at their disposal, and the 3.5 mm audio cable can be plugged in any other device you may think of. Okay, iOS 7 users are out of luck, but all the other gamers can make the most out of the G633. The audio cable comes with a mute, play/ pause button and an in-line mic. Connecting the headset to a console is a no-brainer.

The Artemis Spectrum possesses three programmable buttons on the left ear cup. You can assign these buttons different functions via the Logitech Gaming Software. The switch, located above the G keys enables you to choose between a USB (PC) input and a 3.5mm jack input. The flexible mic is yet another awesome feature. It can be totally out of sight when not in use.

If you have ever used uncomfortable headphones, I guarantee you will totally appreciate the comfort G633 ensures during prolonged use. For testing purposes, I wore the headsets for several hours. I switched between a variety of gaming and music genres and did not feel any discomfort.

The ear cups are plush and supportive and they felt pretty comfortable to me. The headband is adjustable. The cloth covered memory foam lining the earcups also provides a great level of noise cancellation.

However, I consider it relevant to tell you that the G633 does not grip your head as firmly as other headsets do. The headset slid off my head a few times, but I believe my hair was partially to blame for that.

Although I have never been a fan of color customization options, you may like the fancy LED light strips the G633 features.

Now, the microphone is my favorite G633 component. When I opened the box, I spent a few minutes figuring out where the microphone was. It turned out that it was hidden in the left ear piece. You can extend it so that it reaches your mouth and take it back when you do not need it. Admit it that this is a way more convenient than having a mic sticking out all the time.

The hidden mic enables you to plug the headset into your phone and listen to music on the go. And here comes the biggest pitfall of the G633 headsets. The device is quite bulky as compared to similar products. I mean, this is definitely not the most travel-friendly Logitech model, so keep that in mind when you pack your luggage for a trip.

The mic auto-mutes when you raise it. You can also use the mute button to turn it off manually. When you mute the mic, you will see a red LED light notifying you that the mic has been disabled.

The back of the left earpiece houses the three programmable buttons and the volume dial. Frankly, I think Logitech designers haven’t rocked the boat with the button placement. As a matter of fact, I consider their location a bit weird and inconvenient.

The boom mic got a bunch of positive comments from my conversation partners on Steam. I believe that statement speaks volumes of its performance.

As for the inline mic, it did well in chats and phone talks, although I expected it to offer a better quality sound.

During my tests, I haven’t stumbled upon the following issues but gamers I know told me about them.

A friend of mine told me that his G633 gave him a hard time with the TeamSpeak. When the mic was raised or disabled via the mute button, it does not reactivate when unmated. To have this problem solved, he had to change the device mode to have the mic back on track. At the end, it turned to be a problem with the drivers.

You can take advantage of the surround only when you plug the headsets via the USB cable. The 7.1 surround is emulated via the software driver. However, it is important to mention that this driver is included only on Mac and Windows. Linux users will not be able to take a full advantage of the surround sound, even though the headset shows up as a stereo USB audio device. If you use the penguin OS, I highly recommend taking a look at the Roccat Kave.

Dolby and DTS Headphone:X are both great but personally, I prefer the DTS. The latter does a better job when it comes to rendering the positions of audio sources.

The volume of the incoming and the outgoing audio over the 3.5mm cable is pretty low. Therefore, if you expect to run sound through the USB and the 3.5mm cable simultaneously, chances are you will be disappointed. The USB overwhelms the 3.5mm audio. If you make calls while running a game on the PC, you will not hear your chat partner loud and clear. The best approach towards solving that issue is to silence the USB input. However, the inconvenient button placement makes it easier to take the headset off rather than pushing the buttons while wearing it.

I tested the G633 Artemis Spectrum in several games – Titanfall, Batman: Arkham Knight, and StarCraft II: Heart of the Swarm. I did not choose these titles randomly, though. Logitech Gaming Software offers FPS, MOBA, and Cinematic Gaming audio profiles, so I wanted to check if there is any difference. I wish there were more available genres, but you can always customize your own.

As for the available ones, I did not notice any significant difference between them. Nevertheless, I heard the gunfire and explosions in Titanfall pretty clear. The sound in Heart of the Swarm was also very balanced, but the immersive feeling I got while testing the G633 in Batman: Arkham Knight impressed me the most.

If you are a fan of survival horror games genre, you’d better prepare some meds before you put the headset on. I tested the G633 in the Alien: Isolation and I felt thrilled and terrified at the same time.

I have witnessed many arguments between hardcore gamers as to which is better – the G633 or the G933? Personally, I cannot say that the G633 is better than the G933 or vice versa. Instead, I am going to outline the similarities and differences and let you decide which one is more suitable for you. If that sounds fair enough, let’s move ahead.

The most significant difference between the two models lies in the connectivity features. The G933 is a wireless device. It uses a 2.4 Hz wireless connection and a USB dongle. However, you can also connect a 3.5mm cable and a micro USB cable and get three different inputs at once. The G633 offers a 3.5mm cable and a micro USB cable. They can be used simultaneously. You can switch between the available connections by pushing the toggle, located on the rear of the left earcup.

Both devices support Dolby digital; both of them run across PCs and consoles. They weight 374g (13.19oz) each.

The Logitech G633 Artemis Spectrum gaming headset comes with built-in audio profiles but you can program your own and even assign them to individual games. Some of the essential settings you need to customize are the bass and treble balance, the microphone settings, backlighting, buttons, equalization, Dolby and the DTS Headphone:X. If you are a kind of audiophile, you will be fascinated by the number of advanced settings you will have access to.

Is Logitech G633 Worth the Purchase?

According to my observations, most headsets come with trade-offs. Some of them are excellent for gaming, others are perfect for listening to music. My overall impression is that the G633 strikes a fine combination between these two. My only criticism is that the headset is quite unwieldy. Keep in mind that the button placement is a bit inconvenient, too.

Logitech G633 Artemis Spectrum is not the most portable headset in the world, but it delivers an awesome performance and it can be a great asset to your stationary gaming setup. 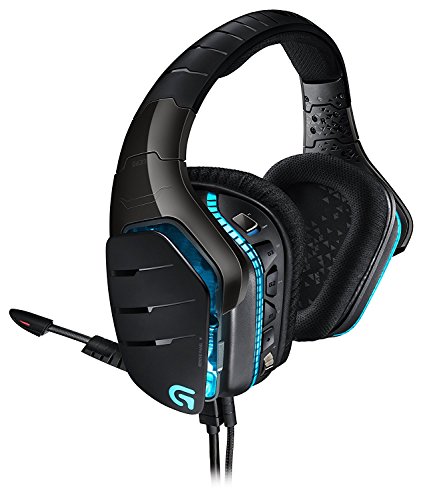